On the next day, we went early to Sibulan Airport without bringing our bags because we were not so sure what would happened. We never had eaten our free breakfast yet which we should consume at Harold’s Mansion.

Note: I’ll be blogging here what happened to this trip and I never meant to offend anyone or the company.

Our original scheduled flight was cancelled due to aircraft situation. The e-mail said we need to depart from New Bacolod Silay Airport at 7:10PM and arrive in Mactan at 7:50PM. I did not like the idea because it was additional baggage for us on paying another bus ride or landtrip to Bacolod or back to Cebu. 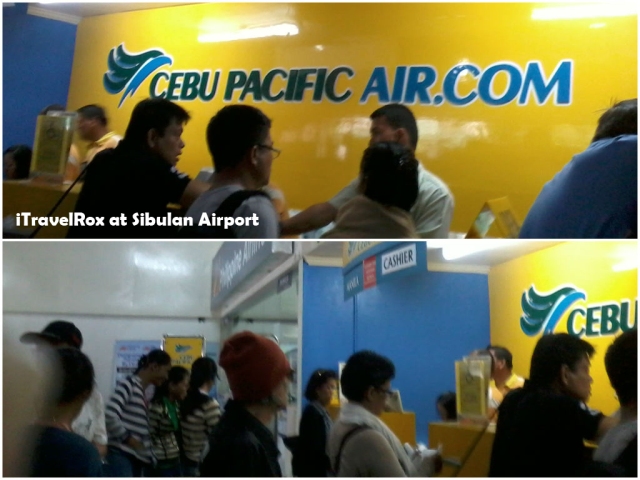 Some passengers who were going to Cebu were pissed. We were not sure what options were given to them. We had observed that the passengers had a very important appointments to Cebu.

We did not like the available options given to us because we only wanted to go back to Cebu the fastest way possible which is traveling by plane. We had several deliberations until the Cebu Pacific crew gave us the option of flying to Manila as a connected flight in going back to Cebu.

Good thing we had no worries on going back to work. Our eyes sparkled with the thought of going to Manila for free because my friends never been there. But flying to Manila was 50-50 because they needed to see any vacant seats for those who cancelled their flight.

Cebu Pacific crew gave us the possible time of the flight to Manila for us to come back and wait. We went back to Harold’s Mansion in order for us to eat our breakfast. Of course, we already had our bags packed so that we just grabbed and go.

We enjoyed our breakfast and hurriedly gave the key to Harold’s Mansion staff to check-out and paid another tricycle ride to Sibulan Airport. We felt like we were in the Amazing Race because we were chasing time. We even asked the tricycle driver to go faster. While at the tricycle ride, Tata was talking about SM Mall of Asia and our eyes twinkled but we were not sure yet.

Big Smiles on our Faces

We arrived at the airport on time and the crew entertained us. Good news, there were 4 vacant seats for us so we were good to go. Then the female crew gave us a schedule for a 12-noon back to Cebu. Tata was very quick with the idea and told her to gave us the last trip going back to Cebu at 7PM. LOL! She was shocked. It came to our mind that we should visit SM Mall of Asia.

All things were settled for our flight to Manila to land at NAIA Terminal 3. On my next blog post, check out our SM Mall of Asia trip.

2 thoughts on “Unexpected Trip to Manila”